A beautiful day on Saturday at Llanthomas Fishery…no wind, bright sunshine – just how May should be. I was up there to start spraying off the emerging Himalayan Balsam, which has been a bit retarded in its’ growth up to now, but has just started to shoot away! After an hour putting together the backpack sprayer (instruction leaflet written by the same people who work at Ikea!) I managed to get it to work, and spent a happy couple of hours spraying a few acres of green shoots. The views of Hay Bluff and the Black Mountains are spectacular from the bank, and a Red Kite wheeling overhead always makes my day.

The fishery was hosting Richard and his wife for the weekend (and their two dogs), so when I noticed the mayfly starting to hatch, the sand martins starting to swoop down over the water, and the trout start to rise, I finished the spraying and went back to the Salmon Hut to persuade Richard to get his waders on and fling some fluff…he didn’t take much persuading.

I put Richard into the water at the bottom of Llanthomas Pool, and he was soon into the rhythm of casting at the rises along the crease of water between the far bank willows and the main stream – and just as soon into his first Wye brown. 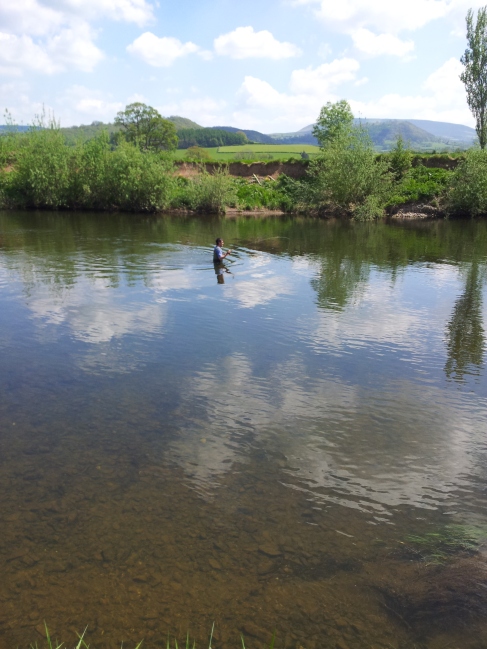 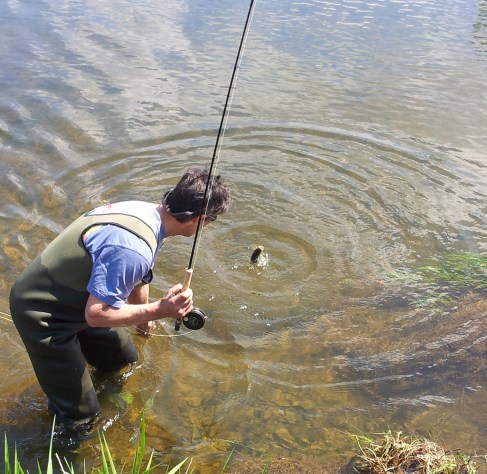 His smile said it all.

Being the best day of the year so far, we were having a steady stream of canoeists coming downstream (despite this being one of the only areas on the Wye where there is NO right of navigation, and NO canoe access agreements in force). Most happily moved to the side of the river to pass us by when asked – until we saw a canoe drifting down with two gentlemen in it, both armed with spinning rods, casually casting across the pool as they drifted! 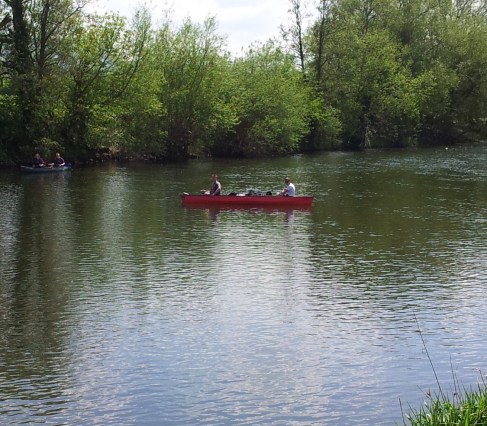 When I politely pointed out to them that this was private water, they told me that it was in their rights to fish from the water without permission, as long as they weren’t on the bank! They were eventually made to see the error of their ways and put the rods away to paddle downstream…I’d like to know why the canoe hire people don’t point out these basic laws when they hire a canoe to two lads with fishing rods on a private river. The hire groups are just interested in selling boat space, it would seem, and don’t care about the rights of the riparian owners, whether it be respecting fishing rights or seeming to think that they can paddle anywhere on the river. 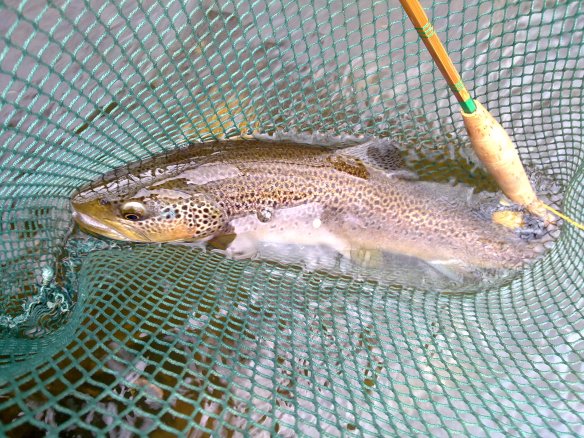 And one in the net…a very nice River Usk brownie. 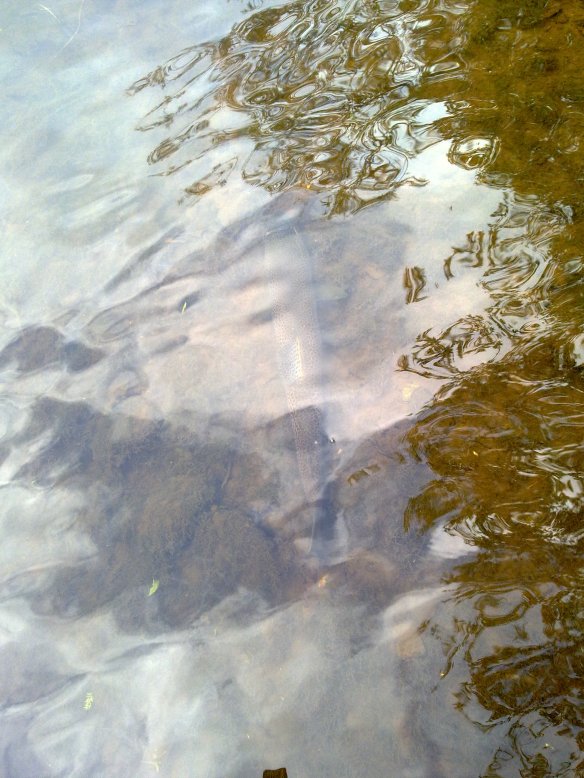 One in the water… 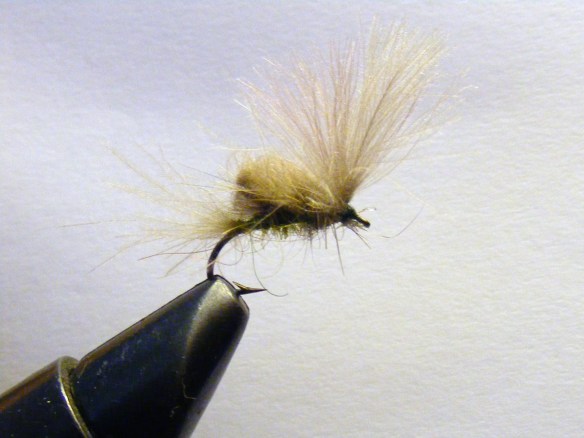 Here’s the story…I looked in my fly box before going to fish the Usk on Sunday and I was short of BWO CDC emergers, so I thought I’d tie some up. Into the fly tying drawer, noticed my new tube of superglue had fallen over and the glue had set all over the bottom of the drawer.

Still, not too much stuck to it, I got out my (almost new) packets of CDC and tied up a dozen emergers, and set off for the river. Tied one on as the BWO were hatching, and set to…one of my own cane rods, an 8′ 6wt and a matching Cadno Silk Line, a 3lb tippet…flick it over to a rising trout and got a rise straight away – a nice spotty brown and gold Usk fish of about 12 oz.

“This is good”, I thought, and cast out again, only to see the fly sink as soon as it hit the water. They often do after taking a fish, so I pulled it in and dried it on my amadou patch, and tried again. Same result.

“Very odd”, I thought, and dried it off more. Still sinking…so I changed it for another fly. Which instantly sank. As did all the rest – I resorted to a dab of red tin mucilin to grease the wing up and try to make them behave. I fished out the session until the cold wind put an end to the hatch and I went home (waders are leaking at the crotch, not a comfortable experience!).

Once home, I looked at the packets of CDC and noticed that there were white fingerprints all over the cellophane packets – just like the ones you see on CSI after the techs have put an item through a fume cabinet….powered by superglue!

To raise fingerprints, what cyanoacrylic fumes do is to polymerise any oils left behind on objects and they show up as a white residue…and the fumes would also have polymerised all the CDC oils on the feathers, making them sink!

So there…a way of making fast-sinking emergers! Note to self…always make sure the lid is on the superglue! (And go out and buy another £30 worth of CDC…)

From a happy customer…

I had my first opportunity to try the #5 yesterday , and I’m seriously impressed.
A bright , blustery , day had me using the “ Clyde “ taper.
Despite the downstream “ breeze “ , casts using a cropped 15’ 5lb Leeda profil leader went out straight as a die and with excellent turnover. I cropped about 4’ from the butt end of the leader to bring the diameters of line and leader a little closer and added a tippet ring + 3’ of 5lb + 2’ of 3lb.
Worked a treat.
Liftoff was as clean as a whistle , with little or no spray on the forward cast.
But you know all this already.”
What you don’t know is that the line accounted for 3 Clyde fish between 2lbs and just under 3lbs.
A difficult day with no hatch to speak of , but a few “sippers “ between 6&7 pm.
#20 Griffiths Gnat sorted them out.
Looking forward to trying the #4 on Ayr someday soon.

Brian won two silk lines in the “Let’s Tackle Cancer” section of the Fly Forum website, and chose a DT4 and a DT5, with a short taper at one end of each to get a good turnover against the notorious Clyde downstream winds!

I’ve just given Chris Clemes a tour of the silk line workshop…he’s been fishing the Upper Wye for trout over the weekend, using his beautiful cane rods and my silk lines – a 3wt DT in this case. His rods are available for casting in Farlow’s of Pall Mall, all ready lined with a Cadno Silk!

We went over to my casting field and I cast his 7′ 6″ 3wt…a very responsive and accurate little rod, very light in the hand and balanced with one of his own UK-made reels. Chris got the chance to throw out some huge two-handed casts with one of our silk Reid Scandi lines on a 10′ 8′ 8-wt switch rod I’ve built up for summer grilse and sea-trout fishing.

Hopefully Chris will be back to try some of our Usk trouting in the near future – if the tigerfish don’t get him on his Zimbabwe trip next week!

Mark & I went out for an evening on the Usk on Saturday…wonderful weather except for the very cold northerly breeze, which unfortunately kept the fly down, so rises few and sparse. First time out this season for the old 8′ Farlow’s “Coronation” rod, with a 3 3/8″ Perfect and a Cadno Silk 5DT. Lovely combination to cast, pity about the fish!

This weekend we’ll be organising a work party on Llanthomas Fishery on the Wye to spray off the emerging Himalayan Balsam shoots – bit of a ‘Forth Bridge’ activity as we have acres of it, and so do the beats upstream! So…no matter how much we eradicate the pest on our banks, the floods will bring more seeds downstream.

However, it’s well worth it to stop the growth through the summer and allow the native plants to recolonise! 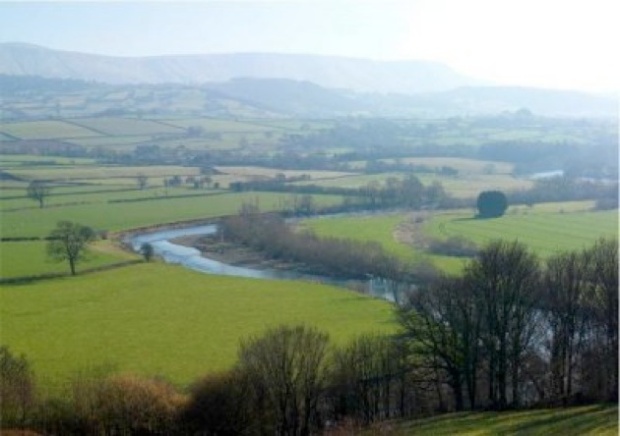